Here’s a fun one. Star Wars The Roleplaying Game by West End Games was one of the first non-TSR games I played. It was so long ago, and I was so young and broke, I never even owned a copy.

Some very fortuitous circumstance came about to make this project a reality. West End Games was purchased by Nocturnal Media, but they no longer held the license to produce RPGs based on the Star Wars intellectual property. Fantasy Flight Games is the current license holder (after a stop at Wizards of the Coast). At any rate, Nocturnal, FFG, and LucasFilm all collaborated to bring this 30th Anniversary Edition to light. The core book has a lovely posthumous dedication to Stewart Weick as it would not have been made without his efforts.

As a fan of both the game itself and of anything Nocturnal Media was involved in, SW:tRPG30AE was a no-brainer purchase for me. 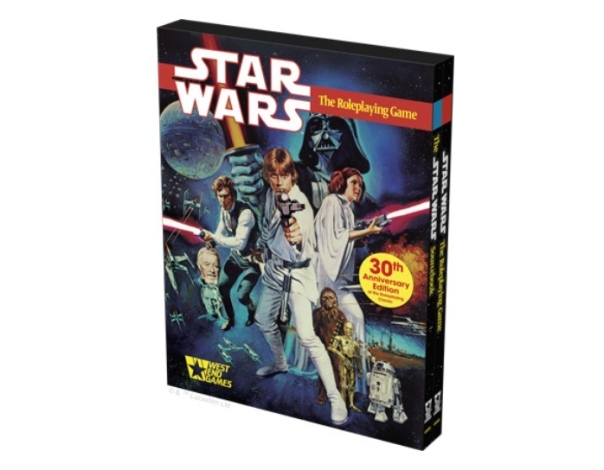 Today I’m reviewing Star Wars The Roleplaying Game 30th Anniversary Edition by West End Games. This is a reissue of the classic RPG in a slipcase with the quintessential Star Wars Sourcebook. The review will cover the entire product as a whole.

Sitting on my desk next to Star Wars Edge of the Empire, a modern game I’ll likely never review because I don’t love the dice system, SW:tRPG30AE is similar in size and weight. However, in terms of pages, SWEotE is 400 pages and change, while both 30th Anniversary Edition books combine for just under 300 pages. This isn’t to say the reissue isn’t packed with content, the font is smaller, and in the style of most older games, there isn’t a ton of graphic design taking up space. 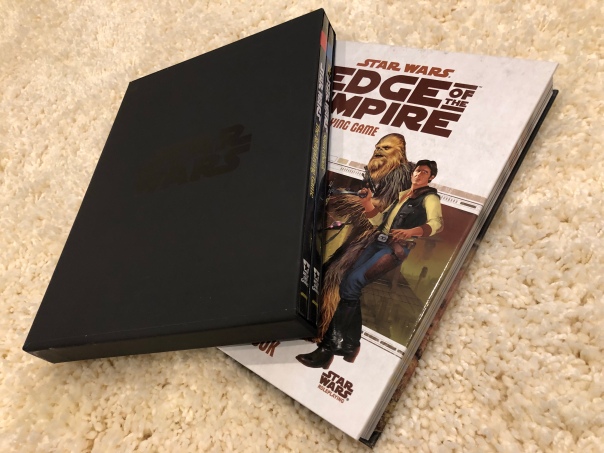 Where I’m just a bit disappointed is with the paper. I’d hoped Fantasy Flight would have sprung for nice smooth semi-gloss pages, but instead, we get the same type of paper the original game was printed on: flat white paper slightly rough to the touch. Yes, the same twelve full-color glossy pages are sprinkled throughout the core book that were in the original. The Sourcebook has none, although it’s pages are the same iconic black+blue of the original.

That said, for the price, you’re getting two hardbound books in a gorgeous slipcase. I’m not that upset.

I recommend picking it up at your friendly local game store. Retail price is $59.95 (or a few bucks less on Amazon).

By modern standards, the art is still decent. It was fantastic for its time. I love those twelve glossy full-color pages so much. Everything else is black and white, and high quality. There’s also quite a lot by the standards of the time. As I flipped through SWEotE, a game with the gorgeous art Fantasy Flight is known for, I didn’t see a significant amount more than these books have.

Here’s a neat thing about SWtRPG30AE if you don’t already have a copy, it’s entirely rooted in the original trilogy. If episodes IV-VI are your jam, this is magnificent news. The Sourcebook is jam-packed with details about ships and other vehicles, locations, creatures, enemies, and info about your favorite characters.

And THEN, there are the rules. WEG D6 system was developed for the original Ghostbusters RPG and adapted for Star Wars. These rules hit a note I love and something you’ll see me talk about when discussing TinyD6 games. They are simple, not stupid. The rules have been remarked by some as having a bit of a scaling problem at higher levels, making it difficult for GMs to challenge their players. I can see that being partly true, but a good GM should be able to deal with it. Hopefully with WEG D6 2e is released, it will deal with those issues because I love this system and would love to see more games developed with it.

The book is laid out a bit funny. The “Gamemaster Section” is really just the game rules with GM tips and some fairly prescriptive guidance sprinkled throughout. The “Adventure Section” has some additional thoughts on running and creating adventures. Overall, meh.

There is an iconic, four-episode adventure included in the book. It’s pretty good, and I’d run it as an intro to the game if you have four sessions or an all-day affair. Also, there are ten “adventure starters” that show some of the variances of the Star Wars universe. Most of these would make fine one-shots or additions to an ongoing campaign.

On the toolkit side of things, the SWRPG Sourcebook has all kinds of good stuff you can use to put together a long-running campaign.

If I were adding points for nostalgia, Star Wars The Roleplaying Game would get an extra five at least. It’s a solid game.

You made it to the end! Have a fun pic of Harry, Carrie, and Mark with some stormtroopers as a reward. 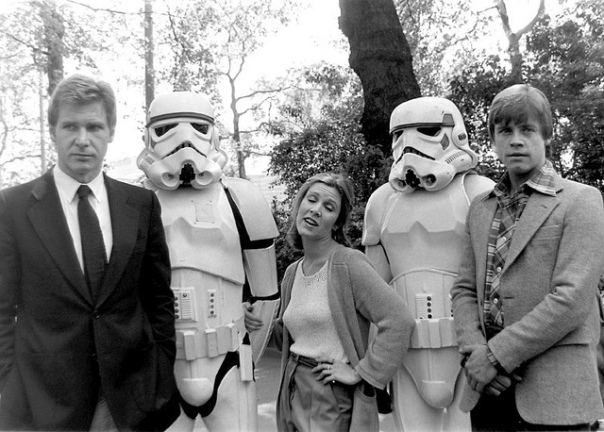 A Final Note About My Reviews

RPG reviews are among the highest viewed articles I write, and I’m glad people seem to like ’em. I stick to games I enjoy, have played, and usually have run at least once. I avoid reviewing RPGs I’d score low because frankly, I can’t care enough about a game I don’t dig to write a full review of it. Life is too short.

I don’t accept review copies, but for full disclosure, I do use affiliate marketing tags on my links to DriveThruRpg and Amazon. Thanks for reading. See you again soon for another review!